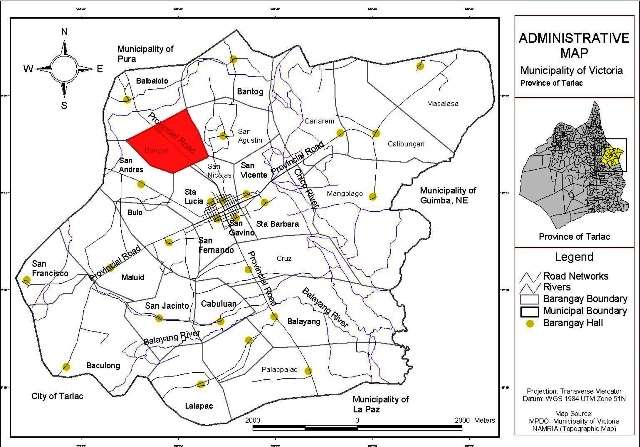 Bangar, one of the smaller barrio of the town of Victoria was founded long before Andres Bonifacio founded Katipunan. The first settler of this barrio was Ilocanos who came from the Illocos Regions. The settlers settled first in the town proper, but because of their desire to have, to have their own lands they decided to move to the northern part of the town which was then a virgin forest where only wild pigs, deer, and other wild animals lived. Under the energetic leadership of Salvador Dagman, the new settlers cleared the place little by little, built their homes and tilled the soil where they planted rice, corn and camote.

Constituting Barangay Bangar is a total of 469 households with a population reaching up to 2,108 , and a land area of about 424.22 hectares. Chairman Wilson J. Villacentino heads the primarily agricultural Barangay.
Around 220 farmers admit that they generally use chemical compounds as fertilizers. Other than palay, legumes such as mongo, are also planted in between harvesting seasons. Barangay Bangar is never left out in terms of its active production of agricultural yield, primarily palay, with almost 90% of the total number of households, or 316 out of 416 households as farmers, livestock raisers and agricultural-service provider.

Other sources of income are generated from contractual wages (30 heads) and regular salaries (22 heads) of some household heads. On employment, there are about 337 self-employed household heads and some 23 heads considering themselves as unemployed.